Remarks by President Ghani at the Global Sustainable Transport Conference 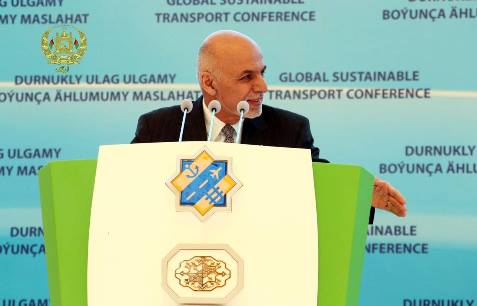 In the name of God, the Compassionate, the Merciful

First of all, I’d like to thank Turkmenistan and the United Nations for the excellent arrangements and for the hospitality offered to us.

I’d like to congratulate Turkmenistan for following up on the “Ashgabat Declaration”. It was merely two years ago that the “Ashgabat Conference on Corridors” took place, and Turkmenistan needs to be sincerely congratulated on translating a series of ideas into concrete realities on the ground. Every single one of the commitments that was made in the Ashgabat Declaration is being translated and all of us are beneficiaries of this.

We are in a distinctive global moment, and I’d like to highlight three features of this global moment regarding transport.

First, it is not a question of developing world. The developed countries’ infrastructure is in need of almost total renewal. Emerging countries need to invest in a major way on transport, and equally developing countries.

Secondly, the amount of money that is required for the next twenty years is 40 – 60 trillion dollars. It is one of the most significant investments that is likely to take place.

And thirdly, it coincides with the fourth industrial revolution where technology fundamentally changes the nature of our relationship. Therefore, we need to understand that we are at a significant moment of global transformation and the corollary of this, particularly for the United Nations, is that sustainability is not addressed towards developing countries.

And on sustainability, I would like to differentiate between the outcomes that have been clearly articulated, but in terms of transport also, focus on the process of reaching sustainable transport. And here, the main features are design, build, operate, maintain and sustain.

Design of transport globally has been massively problematic. We are still designing on the old standards rather on green transport. Major design companies require regulation and a voluntary compact to design regarding sustainability.

Building; the construction sector is one of the most ineffective and equally corrupt. If we are going to address the question of sustainability, the question of corruption in the transport sector globally needs addressing. Equally, in terms of ILO standards, the construction industry needs few of those and its massive unskilled labor and requires understanding.

Operation and maintenance standards are a massive problem and all we need to look in terms of operation is the global logistic index. In all of these, Turkmenistan has made very significant steps so as it requires, but we need for change.

And just to illustrate this, seven years ago, the construction sector and transport in Singapore, one of the most efficient hubs of logistic, considered itself to be half as efficient as Australia and one-third as efficient as Japan. It is a sector that needs benchmarking and change.

My thesis would be that the expenditure could probably be cut by one-third if we adopt it truly sustainable process and not just outcomes.

The other thing, let me turn, is our geographical context and that is next to the American integration as a continent. Today, we are in a unique moment where the Eurasian continent could be integrated from one end to the other.

And here, the landmass cannot be connected, but through railways, fiber optics, transmission lines, and roads. Our tragedy is that South Asia still remains the least integrated region of Asia and lack of progress in South Asia’s transport integration is a key obstacle preventing the continental Asia integration.

I called upon all my fellow heads of state and government in South Asia to take up the question of transport integration as an urgent issue of the moment because Central Asia – all indications from everywhere prove – is the shortest way for integration of Asia, but unless South Asia moves and joins this process we will still be having two-third of the continent integrate rather than the entire continent.

And the opportunities particularly for poverty reduction and meeting of the rest of the goals are upon us are unbelievable.  The poor of Asia deserves visionary and committed leadership to address the question of transport integration, and that is what is really significant as essential.

Lastly, let me turn to our potential in Afghanistan. We are at the heart of Asia, but it is heart to which no flows used to take place. Turkmenistan steps, Uzbekistan’s new openings and our reaching to China and revival of the Silk Road are opening this clogged arteries.

But the potential for Afghanistan needs to be looked not from a national perspective, but from and Asia continental perspective and as a way of integration. We are a roundabout where all things need to connect together and come.

The additional issue regarding sustainability that has not been remarked because I am not repeating the remarks of distinguished president of Turkmenistan or the United Nations is the impacts of transport revolution on peace.

Our investment in transport can transform conflict zones into zones of cooperation and in that regard Afghanistan is a key test and a pilot for showing that our investment in the poor and addressing the needs of cities and key areas could be quite significant. Because of this, we in Afghanistan are keen to offer ourselves as a global pilot for green transport and for sustainable ideas. This type of partnership would enable us to shift from one road or one railway at a time to look in an integrated vision, ways of financing and connecting.

China will not only connect to Iran through us, it will connect to Pakistan and India. Iran will not only connect to Uzbekistan but also round the world. It is important that we think this through and also broaden the concept of transport the way Turkmenistan has done where transmission lines and pipelines will also be seen as the structures of connectivity. There is a world truly to in and an opportunity to lift tens of millions of people out of poverty.

I congratulate you on convening this conference and I hope that it would be as productive of results as the Ashgabat September 2014 Conference. And once upon the end, let me congratulate the secretary general upon a distinguished career and what a way to conclude it with a siren call on the world to focus in earnest on one of the most truly transformative sets of ideas and actions that can take place, and to thank His Excellency the president of Turkmenistan for hosting us and for following up.